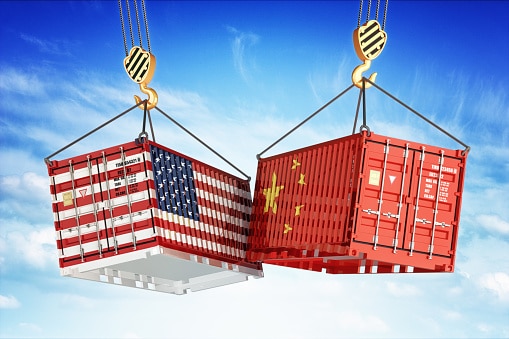 The New York Times wrote a great article last month detailing the situation. They mentioned that the trade actions between the world’s two biggest economies would impact the global economy in terms of decreasing job availability and interrupt supply chains. It’s a trade war that’s been ongoing for months with tensions rising, and on July 10th, 2018, the administration made good on their promise.

“China apparently has no intention of changing its unfair practices related to the acquisition of American intellectual property and technology,” Trump said back in June. “Rather than altering those practices, it is now threatening United States companies, workers, and farmers who have done nothing wrong.”

They released a list of goods that may be subjected to 10 percent tariffs. The list has an annual trade value of a staggering $200 billion – hitting a multitude of products including meat, fish, eggs, vegetables, coal, handbags, automobiles, car parts, tobacco, and thousands of more products Americans use every day.

A public hearing will take place between August 20th and 23rd to review the proposed tariffs.

This is a question that’s on most of our minds at the moment. The latest list seems to avoid a lot of major consumer items, such as cell phones, toys, and pharmaceuticals, which shocked economists all over the country. So what WAS included? Here’s an overview:

Who will be impacted by the trade war?

The trade war will have a widespread impact with consequences for businesses, employees, consumers, investors, and political leaders alike. President Trump has said time and time again that winning a trade war will be simple. He’s also stated that he’s prepared to impose tariffs on up to $550 billion of goods, but that’s a scary figure when we consider that only $506 billion of goods was imported into the US last year.

Unfortunately, if we see $550 billion of goods subject to tariffs in the future, we’re bound to see consumers caught in the middle of the trade war with prices going up and taxes increasing.

Consider this: manufacturers rely heavily on components that are being penalized at this very moment. So what happens when manufacturers are forced to pay more for their parts?

The answer is simple: manufacturers will pass that extra cost onto you – the consumer. We’ll be seeing price hikes on computers, phones, and all sorts of everyday items we purchase because they use components like LED lighting. Let’s look at the price of washing machines, for instance.

In January, washing machines were subjected to a separate series of tariffs. In the past year alone, the price of a washing machine has gone up approximately 8 percent. We’re not only looking at an increase in prices but also inflated costs for businesses leading to layoffs.

What happens next between the world’s two biggest economies?

South China Morning Post wrote an article stating that the real target of the administration is the country’s “Made in China 2025” strategic policy, which has wound up governments around the world. China is striving to have a strong, booming technology industry by 2025, but the current administration believes this behavior is aggressive and a threat to our trade goals.

The Washington Post provides some great information here in regards to the “Made in China 2025” strategic policy and how it’s threatening our trade goals. Many sources state that the relationship between President Trump and Chinese Leader Xi Jinping is still solid, as they work together on a variety of issues. But at the moment, neither country is ready to end the trade war.

What should your next step be?

It’s a simple fact: you must embrace the digital era if you’re going to survive in today’s incredibly competitive marketplace. This means you must invest in technology that helps you operate more efficiently – streamlining day-to-day operations, automating tasks, and improving collaboration amongst staff members and customers.

Forbes offers information on prioritizing technology and how to pay for it, but it’s vital to make those investments now BEFORE we see price hikes.

A good technology solutions provider can help you get started and make sure you’re headed in the right direction. But it’s imperative to move now before we see prices skyrocket.

If you enjoyed this article, don’t forget to check out “Are you scared of the cloud?” or “Protecting your organization for IoT exploits (research/information)” or visit our blog for more helpful ideas.